Unmissable panoramic location, just few steps away from Rifugio Tognola from which it is possible to enjoy the beauty of the Dolomites, universally recognized UNESCO Natural World Heritage.

UNESCO Dolomites Terrace offers the most amazing panoramic view of Alpe Tognola. From here it is possible to admire the wonderful surrounding landscape that goes from Pale di San Martino to the peaks of the nearby and wild Lagorai chain, a place of combat during the Great War.

The site overlooks the third of the nine Dolomite groups recognized as UNESCO World Heritage Site, it built aiming at promoting knowledge and enhancement of this wonderful area.
Paneveggio Pale di San Martino Natural Park completed it in 2016, as part of the initiatives aimed at creating info points dedicated to Natural Resources in hot spot areas of the Dolomites. 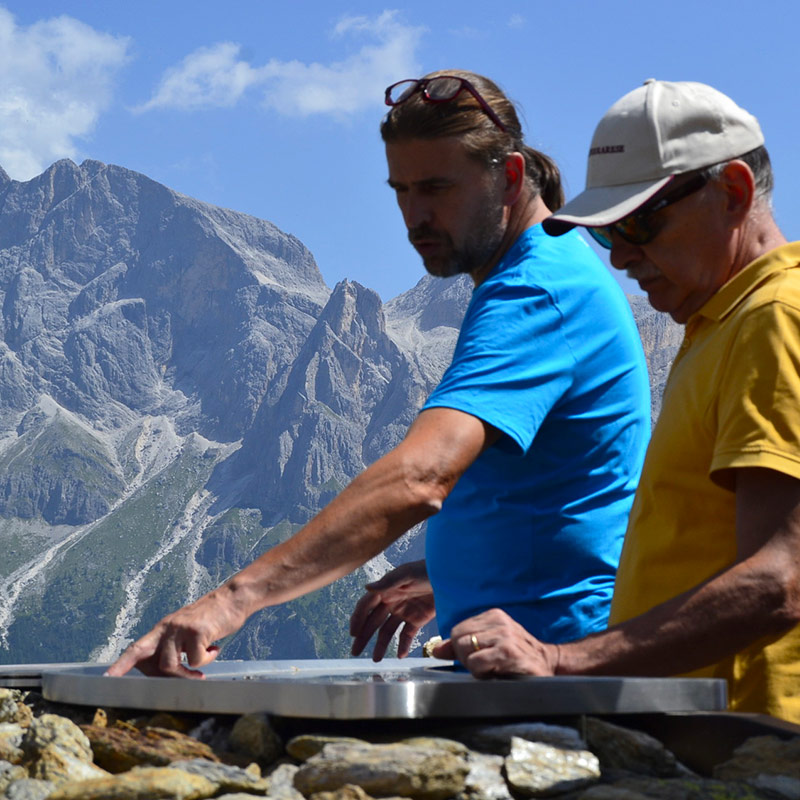 From the Dolomites Terrace it is possible to discover numerous information on local geology and geomorphology of these world- known and loved mountain thanks to two info points.
The panels, located onsite and available to all visitors, analyse different aspects of the observable mountain range and its history.

Observing the landscape, one immediately notices a variety of shapes and colours that find a clear break almost in the centre, where, in the background of the horizon, the line of Marmolada ridges emerges. To the left of this cut the mountains are dark while on right they are light: the colour reveals their different origin.

Starting to the left and looking for Cima Tognola, from this observation point, it is the only witness of the oldest rocks not only of the Park but also of the central-southern Alps: those of the Subalpine Metamorphic Basement. The Basement derives from the transformation of previous material; for Tognola specifically, it is quartziferous phyllites, morphic rocks deriving from sediments such as clays or sandstone settlements 520-480 million years ago (m.y.) and then metamorphosed through high temperatures and pressures due to Hercynian Orogeny of approx. 350 m.y.

Moving our sight clockwise, following the dark ridges of Lagorai chain up until Tognazza, we see the imposing remains of an history of volcanic eruptions and explosions coming from Trento and Bolzano area and invading the territory in subsequent waves lasting 8 million years.
These are the remains of Atesina porphyritic platform which had an extension of 2,000 square km and a thickness of up to 2 km.

Keeping the right, the colours change radically to light grey; the unmistakable Cimon della Pala bastion opens the peak series of the Dolomite Group of Pale di San Martino, majorly composed of “Dolomia dello Sciliar” (Schlerndolomit). This Dolomia consists of the settlement of real coral reefs active between 235 and 230 million years ago.

Further east, in the background, Piz de Mez, Piz de Sagron and Sas de Mura peaks are living evidence of areas where the deposition of limestone muds and marine organisms continued for a long time in the Tedide sea, forming other large and important Dolomite complexes composed of Main Dolomia.

At the bottom of the Cimone della Pala, a well-stratified formation with evident folds can be seen, it is the Bellerophon Formation, consisting of alternated gypsum repeated with dolomites, limestones and marls. The Formation is the result of a low lagoon environment, almost a saline, in a warm climate, that at times evaporated leaving deposits of gypsum (calcium sulphate) and Dolomia: 260 m.y. ago began this long period of repeated transgressions of the coastline in a cyclical series of depositions and evaporations.

The thin and tender layers were folded by the strong compressions caused by the collision between the African and European plates.

Higher up the thick reddish, grey-violet layers of the powerful and characteristic Werfen Formation can be observed; it is the result of a continuous alternation of geological transgressions and regressions of the coast line in that tropical sea where reddish clays and calcareous sands, with gypsum sheets were deposited for 10 million years in a subsidence plain.

Above it, the white “Dolomia del Serla” can be spotted, originated from quieter areas sedimentation and less soil contribution, where living organisms could settle.

HOW TO REACH UNESCO DOLOMITE TERRACE

This place is located at the start of Panzer Trail, 10 minutes on foot from Rifugio Tognola, an easy family friendly track. It is also reachable from San Martino di Castrozza in 1,5 hours through the Panzer Trail.

Alp of the Marmots Park

Alpe Tognola Infopoint and booking office is at your disposal to help you plan your holiday in San Martino di Castrozza.
The service is available everyday from 8:30 am to 4:30 pm.